I have a friend who told me he would only come to my bible study if there was no homework. He probably won’t like this Monday Matters.

After one of her first sermons in a new church, a friend got a call from a parishioner to offer feedback on her sermon. The caller commended the preacher, but said that her frequent references to Jesus in her sermon was not the way they talked in that church. Let that sink in.

I was reminded that in our work with congregations, we find that many Episcopalians define themselves in terms of what they are not, and more to the point, who they are not. As we discuss questions of faith, they will often tell me that that is not how Episcopalians speak. When that happens, one of our wise counselors tells folks: “If that’s not your language, what is your language?”

We’ve been reading Jesus’ teaching about prayer. It could be easy to focus on the things we’re not supposed to do in prayer, e.g., make it showy, make it a public spectacle, go on and on. As we continue in reflection on the Sermon on the Mount this morning, we find that Jesus gets very specific about how we should pray. He offers what we have come to know as the Lord’s Prayer, a prayer included in every liturgy in the Book of Common Prayer.

In Luke’s gospel, the Lord’s Prayer is offered in response to the disciples’ request that Jesus teach them to pray. The disciples ask for a prayer, noting that John the Baptist had given his disciples a prayer. (Luke 11.1) It seems like that prayer given to those disciples was a mark of their identity, a sign of who they followed, a sense of who they were. There are other prayers that do that kind of thing. The Serenity Prayer, attributed to Reinhold Neibuhr, provides a sense of identity for the recovery movement. The prayer attributed to St. Francis (“Make me an instrument of your peace…”) provides identity to any number of communities. Is there a prayer that reflects your identity?

With that question in mind, let’s dive into the Lord’s Prayer, bit by bit.

Our Father: The prayer begins by noting who we are talking to. The prayer implies at the outset that this is about relationship, a relationship of a particular kind. It is not the prayer of king and subject, slave and master, employee and boss, judge and defendant. It’s the personal relationship of parent and child. And while in our broken world the parent-child relationship is not always marked by love and care, can we presume that Jesus intended the most loving, gracious relationship, maybe like the father in the parable of the prodigal son?

In heaven: It’s a prayer that speaks of location, offered to a Father in heaven. That says to me that heaven is not some far off place, but much more accessible than we might think. I have a feeling we’ll talk more about how we understand heaven next week.

Hallowed be thy name: On one level, it’s a declarative statement, a way of acknowledging God’s holiness, God’s greatness. We can translate the word hallowed as set apart as sacred, or consecrated. When I studied at Union Seminary, I learned of an Old Testament professor so deeply honored by students that they took off their shoes and left them in the hallway outside the lecture hall to honor this holy man. How much more might we honor the God of creation?

(As something of an aside, I heard of a child in one of our parishes who thought the prayer began: Our Father which art in heaven, how did you know my name? Maybe that child really knew something about the mystery that calls us to this hallowing.) 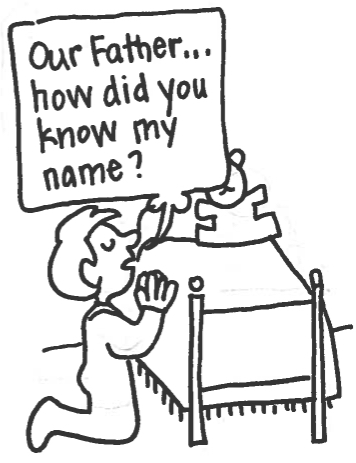 There’s another way to read this prayer to hallow God’s name. It’s an expression of hope, that God’s name would be increasingly hallowed in a world where that is not the case. I can’t help but think that if God’s name were hallowed among all people, however that name is understood, that our world would be in a better place. That is not necessarily a prayer for people to become religious, because it seems that some of the most religious people are the ones who miss the boat, in Jesus’ estimation. It’s simply a prayer that all people will recognize that our common life unfolds in the presence of a power greater than ourselves, a power whose character is love.

Take this upcoming week as a chance to get ready for Holy Week. Reflect on your own relationship to God, your vision of heaven, your understanding of hallowing God’s name, what it would mean for our global community. If you feel so inclined, take on the homework assignment in the column on the left as a way to prepare for this important week in our common life.

Register by August 26th to join us.

RenewalWorks is about re-orienting your parish around spiritual growth. And by spiritual growth – we mean growing in love of God and neighbor.
A cohort of churches is launching the process together this fall. If you’re interested in joining us for the September cohort, you can sign up now!
Learn more in our digital brochure.

RenewalWorks launches cohorts of congregations in January & September each year, but we also accommodate custom schedules.
Sign up now!

RenewalWorks is brought to you by Forward Movement, a ministry of The Episcopal Church that seeks to inspire disciples and empower evangelists. Follow on Facebook or Twitter.